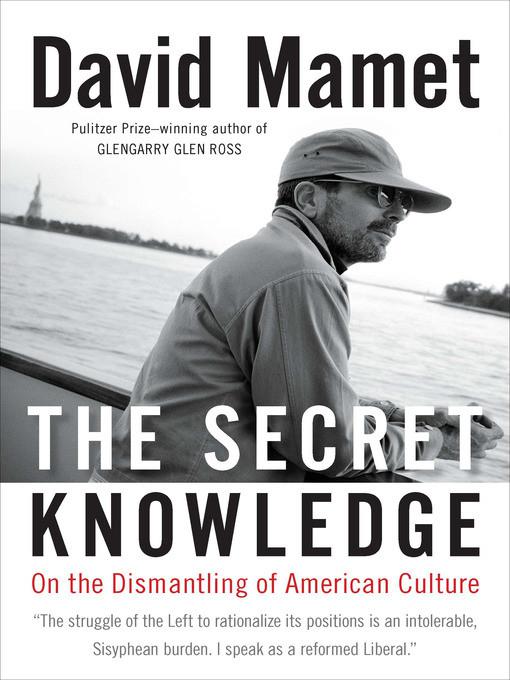 The Secret Knowledge: On the Dismantling of American Culture

"My interest in politics began when I noticed that I acted differently than I spoke, that I had seen 'the government' commit sixty years of fairly unrelieved and catastrophic error nationally and internationally, that I not only hated every wasted hard-earned cent I spent in taxes, but the trauma and misery they produced..."

For the past thirty years, David Mamet has been a controversial and defining force in theater and film, championing the most cherished liberal values along the way. In some of the great movies and plays of our time, his characters have explored the ethics of the business world, embodied the struggles of the oppressed, and faced the flaws of the capitalist system.

But in recent years Mamet has had a change of heart. He realized that the so- called mainstream media outlets he relied on were irredeemably biased, peddling a hypocritical and deeply flawed worldview. In 2008 he wrote a hugely controversial op-ed for The Village Voice, "Why I Am No Longer a 'Brain- Dead Liberal,'" in which he methodically eviscerated liberal beliefs. Now he goes much deeper, employing his trademark intellectual force and vigor to take on all the key political and cultural issues of our times, from religion to political correctness to global warming. A sample:

_The problems facing us, faced by all mankind engaged in Democracy, may seem complex, or indeed insolvable, and we, in despair, may revert to a state of wish fulfillment-a state of "belief" in the power of the various experts presenting themselves as a cure for our indecision. But this is a sort of Stockholm Syndrome. Here, the captives, unable to bear the anxiety occasioned by their powerlessness, suppress it by identifying with their captors.

This is the essence of Leftist thought. It is a devolution from reason to "belief," in an effort to stave off a feeling of powerlessness. And if government is Good, it is a logical elaboration that more government power is Better. But the opposite is apparent both to anyone who has ever had to deal with Government and, I think, to any dispassionate observer.

It is in sympathy with the first and in the hope of enlarging the second group that I have written this book._

Mamet pulls no punches in his art or in his politics. And as a former liberal who woke up, he will win over an entirely new audience of others who have grown irate over America's current direction.

David Mamet is an acclaimed playwright, screenwriter, film director, and essayist. Some of his most famous works include the films The Untouchables, The Verdict, and Wag the Dog, the last two nominated for an Academy Award, and many plays, including American Buffalo and Glengarry Glen Ross, for which he was awarded the Pulitzer Prize.